Its almost like I am scared.Of a misconceived notion.That folks might contrive as a reason for my exile from blogosphere.

That notion might well lead people to think that I drifted away like I did during the (oh boy! here I go all dazed !!!) so-proclaimed lightning era .Anyway to at least corroborate the point that I am not busy in the chakkar of any arbitrary chick again,here commences my return to blogdom …

Intaglio,one of the most magnificent B-school events ever, started off with its flagship event , Olympus !! The 6 IIMs send their supposedly best orators and thinkers from PG2 in a test of GDs,wits and quick managerial ishtyle crisis-takes !!!

Anyway thats not the frigging point!

The 6 were assigned 2 volunteers each on day1 to play the role of employees (the candidates were  playing firm bosses) in exercises of managerial skills!

The girl from IIM-B was the only girl among the 6 candidates.Lots were drawn to assign the volunteers.I was assigned to the IIMB candidate ..yahahaha !!

the abbulu scene of Intaglio : Me throwing an apparatus containing half a dozen eggs from the top floor ! Not one egg broke ! 😀

A week later , the cultural festival.Not as acclaimed as Intaglio but quite famous nonetheless !

I dared and attended the salsa workshop (yeah! go ahead!throw up!! ).The next day, won 2nd place at a treasure hunt (bloody ..lost my cheque)

abbulu scene of Carpe-diem :During the fashion show,me getting into a pushing-match with the official video camera guy for strategic positions 😉 . So as to get my own precious set of awesome pictures !

This is what traditions are made of.36 years of traditional Indo-Pak style rivalry between IIMC and XLRI comprising around 17 sports events over a span of two days .

As a Sports councilor in IIMC, it was a thing of immense pride for me that we laid the mighty ol’ smackdown on their #$^%&% !!!!

Met Yash and RS, old seniors at IIIT-H! RS still has an indifference towards me.I am sure its because of my lightning era thingie.Hmm the Crypt Master (my late dark side) would say, “ya ya ya yaaa yaaa ….Loserrrrr !!! “

abbulu scene of the C-XL meet An XL girl sledging me before the start of the 100m sprint.

And then I decided to bring the notorious Mr.Crypt Master back to life for a 10-second dialogue delivery to her. 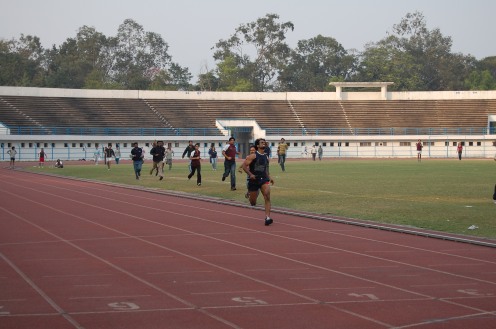 Prior to XL meet,went on a trekking trip organized by Tata Adventure Foundation as a boot camp for the Sports meet

Did rafting ,camping and trekking!

abbulu scene of the trip :People were playing and splashing about in water in a 3 feet deep part of the lake.While the mad ol’ yours truly swam 3 KM in the 300 feet deep part.

The next day,during the trek, I threw up due to excessive exhaustion.So much for megalomania 😦 Hence,I learnt that …

the pristine ‘n’ only,

This entry was posted in At IIM-C, Sports,Machismo,Gym,fitness et al. Bookmark the permalink.

12 responses to “The PITA pending pile”