He sat at his desk.His Chamber.It was the sleekest office any boss of any organization could possibly have asked for his money’s worth.The theme of the office was grey.There were mostly shades of gray, like Al Pacino’s office in The Devil’s Advocate. The office had a fire place too though a fire place is not really required in India !!!

He was the head of a business empire.That which he built on the base of his sweat and blood. He was the head of one of the world’s most powerful (purchasing power wise) and largest (market cap wise) commercial entity, the “Diagnol Group of Companies”

The year was 2015 AD.What started off in 2007 as a small scale intellectual idea, an experimental but passionate B-plan became an ideology of a glorious empire.Within a record time, he and his partners were making profits as if the Gods themselves were throwing away their endless wealths and treasures from the skies!

And to that, add India’s burgeoning economy and what do you have ?! Vikram.H.Saha, the world’s youngest ever Business magnate to have started from scratch and reach a personal wealth figure of US$1bn.He was a Business scion ..naah ..they actually called him the Biz-Lord !

He suddenly thought all in a split second as he sat in his office, pushing himself back against his mammoth cushioned chair. He remembered that his 12th standard lecturer used to kick him during mathematics coaching classes saying “You will never come up in life.You are totally worthless” Vikram or as he is called at familiar circles, Vicky closed his eyes. And correlated the lecturer with the following picture … 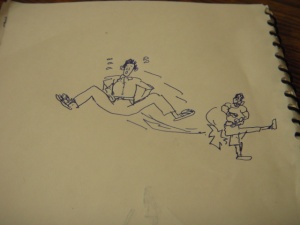 the image of the kicking 😛

” Naah that psycho of a lecturer, Mr.Raghavan had a paunch. From where did he get a sportsman’s physique” He chuckled to him self. He laughed in derision at his own dream. Discarding it because the dream wrongly showed the lecturer having a muscular fit physique rather than a fat, cellulite laden, jelly-base !!

“But why did Mr.Raghavan hate me so much when I was in the 12th standard. I bet right now after having seen my face in many a Business magazine he must be telling his current students that I was a gem of a pupil!! Haha ..the hyprocritic bastard”

And so as Vikram told himself, and was about to resume his checking of some real-estate based documents,the intercom rang.

“Hello Mr.Saha there is a weird man here to see you.He calls himself Mr.Raghavan!” buzzed in the receptionist’s voice.

Vikram asked to send him in.

“Why did he come at all ? What does he want with me ? Shit ! Why am I getting so worked up even after all these years ???”

As Vikram thought, a sharp voice with a metallic rasp whistled past his ears.A suited bald old man,with a paunchless perfect physique, with a deathly pale white complexion, and dracula-like red lips,entered … “So you think you are happy with her ,huh Vicky ?”

This entry was posted in Stories, The Last Conversation. Bookmark the permalink.