A trek three months in the making … I don`t  imply the preparation time but rather the time taken for me to  persuade the guys .

Anyway so there we were  …. ‘El Papa‘ the El Mariachi wannabe , ‘Uncle‘ the  wise one , ‘A2‘  – geek boy from IIT , Mallu – a good city boy not used to physical hardship 😛  and of course the whole operation’s creator, myself 😉

The train and the pre-process

We got out of office last Friday night (30th June ) and headed straight for Dadar station to catch the train. It was around 9 PM and the train was scheduled at 9:30 PM. We missed it since we, like genuine gluttons, decided to go have dinner at a nearby restaurant and lost sense of time while hogging on the substandard butter-seasoned pav bhaji

So we had no choice but to wait for the 10:30 PM train to Lonavla. We did manage to catch it and entered the sleeper class coach with general passenger tickets. So we managed to bargain with the TC and be allowed to sit in the coach … on the floor .. right next to the toilet room (not in the bathroom … next to it, outisde !!!)

We reached Lonavla at around 1:30 AM on the 31st of July amidst a bad-ass torrential downpour and a no-transport scenario. And that was when we made the decision that eventually almost  killed us all …walk all the way!!

We walked along a combination of flatland and inclined areas, all characterized by bad roads, lots of rain water below , lots of rain above and mud piles bordered with multi-species’ shit

We kept walking . It was dark so we had torches. It was cold so we had whisky and fags to keep us from dying of crankiness. We went on for around 20 KMs.

Just before the crack of dawn, we came across a shed with a sleeping fat man. The sleeping fat man pointed upwards. We looked up and as the fog and the clouds slowly cleared, we saw the base of the fort-wall ! Around 300 vertical feet above us! The wall of Chhatrapati Shivaji’s fort on top of Rajmachi.

Mustering the last iota of our strengths, we made a dash for it…

40 min from the realization …

We reached the top.

Top effects and the way down

Mallu kissed the flag pole on the top, since its finally over, not  just the trek but his exponentially increasing urge to keep complaining like a girl 😛

Uncle and I settled on the topmost outpost of the fort’s  remains. We stretched our legs and shouted  victory chants reminiscent of medieval  conquerors.

El Papa sat at a corner probably wondering why he was  not asleep among drunken dreams at home back in Mumbai.

Uncle was blissfully proud of therntu fact that we finished it by dwan.

We came down via the Karjat village side of the mountain, shorter but relatively rocky area.Our our downward bound path, we came across some amusing waterfalls , standing under which we had some cold-fighting shots of whisky 😛 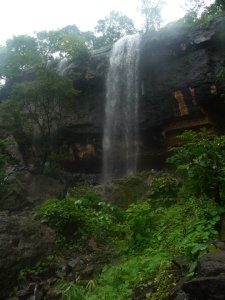 Gravity *s ugly side came about when every downward step we landed set up a chain vibration of our feet muscles thus royally screwing our knee caps.

Anyway we took a local train back to Mumbai, all wet ,and dirty , standing among the annoying  multitudes of Mumbai train crowds.

Still … inspite of the annoyances, the sense of conquest ( effort wise and time taken wise too) lived beyond that day. So ….. Lohagad! You are next …..

This entry was posted in Travels. Bookmark the permalink.