Foreword: Prof.Srinivas , my +2/12th grade mathematics lecturer was good at teaching mathematics, especially the probability and derivative puzzles.Talking of derivatives, the author need not say that their definition evolves from limits.   Now in this post of the author, let there be  a variable x that denotes clarity of thought and t denotes time. If the rate of change of x and rate of change of t are very very small, it can be denoted by dx/dt which is nothing but the rate of your thought  (has correlated theories from the Inception  logic; but that we shall leave for another day)

By the above logic, if there is an isolated moment where your mind gets oblivious of the surroundings, your thoughts might last longer to your brain than they are in absolute time. (Has a complex and more accurate explanation in relativity; but that we leave for another day)

It was MMA coaching at * the academy *at Khar.A sparring session was going on.  Neck crank was being executed to near perfection on my …well! …neck (Obviously! Its called *neck crank*)! In that moment of asphyxiated pain, the surroundings went into oblivion and memories became clear and long though within a span of only a few seconds …

‘It was all due to religion oriented culture’  I told Dad…. ‘I mean look at it this way. Christianity was there for two millenia and it did have its share of orthodoxies. But the western world , most of it came out of it to lead a modern existence. So it took them two millenia but they managed to get out of irrational doctrines!’

‘But look at India! Hinduism was there for nearly 4 to 5 millenia. And even then we had hardly got out of many of our irrational doctrines. Why ? Are not persons supposed to get wiser and more mature with age ? So isn’t Hinduism supposed to follow the same logic!’

‘Its not that simple!’ said dad in his usual Donnie Darkoish way.

I twisted ! The hold on my wind pipe was deflected.I harboured the hope  of getting out of the hold. But then, the well trained opponent of mine wound his legs around my torso to strengthen the hold. And so the 2nd second in mental isolation began  ….

Halley was presiding over a discussion about the education system, economy , and what not on his facebook wall .

The fb status started it all

There was a comment saying *Gen X!* Simply and tersely put!

So there was globe-loving-gratiano-style  that followed ….as shown below 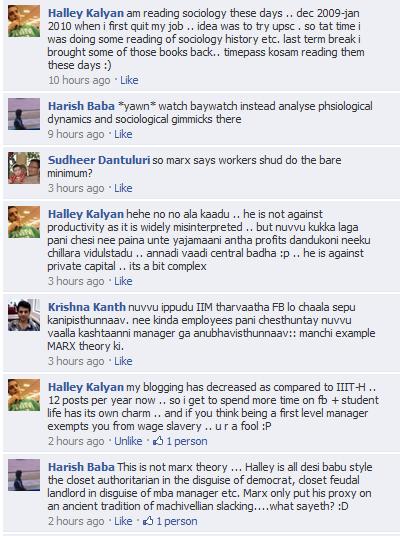 Anyway I was living and chuckling at this fruitless discussion …

back to the real world ….

I twisted again …. the opponents’s foothold got less firm. He was probably not a big master of stamina though his technique was impeccable. But then he tightened his hands around my spine and neck. Then I went into the third second of asphyxiated painful mental isolation …

It was a phantasmagoria of thoughts and memories. There  was no definition absolute. The surroundings seemed more surreal, like in a dreamy state as opposed to the earlier visions where I saw seemingly realistic memories of isolated incidents.

*The Indian military men got carried away in a fucking garbage truck.Is this the way we treat our martyrs ?? *

*Females get killed at birth because of our existing social systems of dowry,  male chiavunism, patriarchal imbalance, etc.*

*The country being the world’s hair supplier*

*The industry of spiritual Godmen*

.....It was starting to get annoying!

back to the real world …

Three seconds done and I was going to go completely out of breath. Out of that desperation and the prior-generated annoyance, I did a full body twist, broke the hold this time and got into a side mount  and threw an Ude-garami to which he tapped to submit.

Phew! I won again, my 16th succesive victory in combat sports…but the country doesn’t seem to be on the winning side 😦  Because of which I don’t feel like a winner as my questions in those three ‘hyper thought rate’ seconds remain unanswered …. 😐 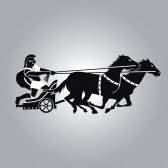 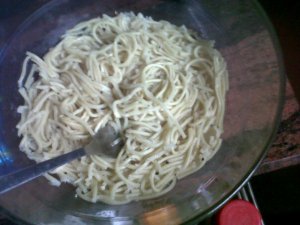 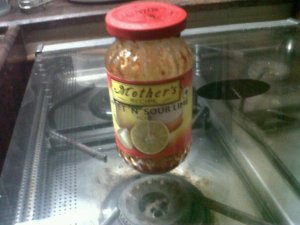 Sullen thoughts , sudden thoughts and the flashy ones come and go by. I sit in the garb of a mere whimsical dilletante  wondering at the thoughts which matter as they come like tachyons and then fly away just as fast … 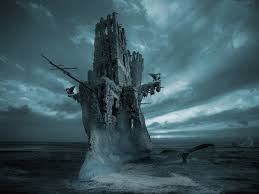 Well these are the words this very author has been telling himself of late, about the ideas he keeps getting about writing his next post.

Unlike at college or B school, where I would in a stroke of pure ‘I do not care a rodent’s oesophagus about anything else’  thought process , would not let the thought go away.I would gladly open up this very wordpress account and start writing away in ill informed or mis informed or uninformed daze, (much to the chargin of the real informed ones … lol) about anything from simple bull**** to jingoistic controversy.

So now I think why do I let one of my greatest solaces (for the confused, its writing/blogging) in this mediocre existence :p dilute away just because I am now part of a working and emerging-nation-characteristic rat race….

I do understand that the visibilities in facebook or twitter (God bless their creators!!!) make up for easier interaction and shorter slack filled blurts and spurts of thoughts. But even then, I somehow believe that in a dying industry (the enthusiasm I put into my blog) , consolidation (blog posts and not fb statii) is the key.

So at least when I have these tachyon like glimpses of ideas which I again believe should be discussed at well deserved length, I should try to open this blog more often. And so …

Sullen thoughts , sudden thoughts and the flashy ones come and go by. I sit in the garb of a mere whimsical dilletante  trying to catch the ones which matter as they come like tachyons and then fly away just as fast … but then…. I want to wake again, tie laces again and run again after them; like a ghost 😀

ps: Phew! Ok , self inpsiring shit done ! Lets get to some bad-ass blogging frequency, shall we …