Korigad , 20 km from Lonavla on the Pune side. It had one of Shivaji’s forts. It was supposed to be an easy trek but the difficult part in the whole trip was to convince the bunch of guys to go there.

El Papa the (in- , dis- , un- )legendary El Mariachi duplicate, Uncle the ancient one , Landy the loose cracker , Nippo the doped one and of course, the crazy ol’ mental me ….

This part is akin to the tumultuous and cumbersome due-diligence phase that usually precedes a merger/acquisition – lots of brain storming (not where to go or when to go but why to go ? 😛 )

If at all we had decided to go there was the question of logistics …not only the physical but also the psychological and mental (Boy! I must be making a little hill like Korigad, sound like Mt.Everest !). For die hard adventurers, it is no mean deal. It’s probably like going for a casual Sunday picnic. But for wee city lads such as the ones under current observation, psychologically preparing to move butts from Mumbai to the city’s outskirts and physically transitioning the body from a hung-over Saturday morning state to an excited Saturday-trekker state is a Herculean task.

The Car and the road trip:

Landy boy’s got a new Nissan Micra in the orange color. The car’s selling points for the trek:

Anyway, so there we went. The Plan was to leave at 6 AM on the 23rd of July. Dutifully adhering to the lazily cultural and boringly traditional best practices of the Indian Standard Time, we did manage to leave not before 7:30AM.

The highlight were the extra-cheese infested but totally lip-smacking burgers we managed to gobble at McDonald’s on the Mumbai-Pune highway. That was just the breakfast!

For all those who thought this was a huge killer operation with never say die shouting Rambos scaling unimaginable mental odds and physical hurdles, a colossal Hahaha at you 😀 !!!  It was a little thing, more like a walk up a hill with stairs (though the acromegalic stairs do screw your knee caps a bit) 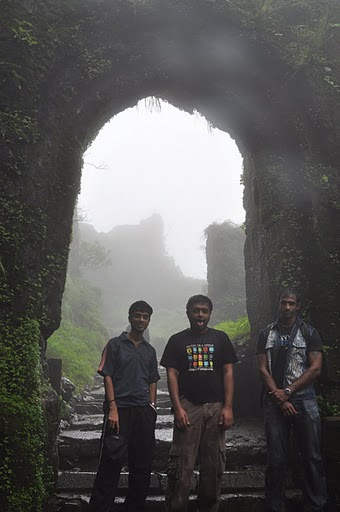 At the top, there was a fog driven hither and thither by the monsoon winds. There were other people, which motivated some of the more lecherous among our group to delve in stealthily appreciating the ladies among the other trekkers. Big bada Boom  was the little harmless CA (chick-alert ) war-cry ! Anyway, apologies for the digression …. Back to the story …

At the top, I do opine that most of the other trekkers were a mightyless bunch of in-depth pansies. Besides being on an easy trek, you don’t go around playing ringa ringa roses  on the top of a hill (boys and girls alike). So we decided to set some trends  ….true maverick macho groovy style

We took off our shirts (oblivious of contributing too much cognition  & recognition towards bellies, body hair and everything else) and jumped in the big lake on top of Korigad. Much to almost everyone’s delight (perhaps a little disgust)  that finally there was some amusing action on Korigad. 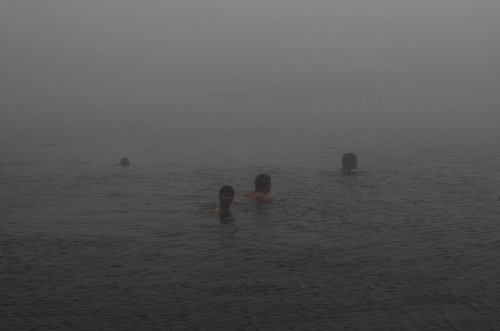 Other strangers followed suit by jumping into the lake too…. 😉

We ate at a food court on the highway after descending the hill and driving a few miles. Some of the more lecherous among us were at it again at the food court, staring here and there, whispering big bada boom  and laughing  a**es off. And then  we hit the road again when we chanced upon the old man …

There was a car in front of us. There was an old man in the car with his family. There was a minor traffic congestion in a narrow lane. So a medium-sized queue of cars was piling up. Someone kept honking from behind much to a lot of annoyance …then it happened …

The old man in front of our car, suddenly got off his car in a fit of rage (perhaps because he wrongly thought we were the ones unnecessarily honking) and stared at us. He then noticed there were 5 buffalo-like guys (Well Landy is a  feather weight , so 4 buffalos + one baby buffalo! 😛 ) in our car. Landy made a “Aah! What !”  expression with a rooster-like swagger of his head. The old man silently went back to his car. Drove us to a state of hysteric laughter ….

So there! Harishchandragad ! You are next 😉

what exactly was stinking ?